Alum Cooks Up A Win In Spain

A pinch of this, a dash of that and a Crusader alum is able to cook up a big win in Spain.

Tim McLane ‘03 took part in a culinary competition in Rioja, Spain in November 2016. Tim is a student at Midwest Culinary Institute. He and Chef Danny Bungenstock represented Cincinnati State at the competition held at The Basque Culinary Center in northern Spain. The objective was to pair a local wine with an original and seasonal tapas (an appetizer or snack). 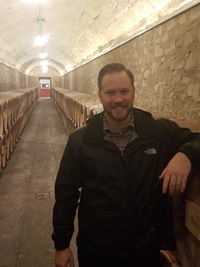 Students from all over the world applied to compete and Tim was one of five culinary students chosen.

Chef Bungenstock said, “His dish was executed perfectly – elegant plating, complex flavors – and he easily had the most disciplined workstation and technique at the competition. Tim’s performance reflects very well on the caliber of instruction at Cincinnati State.”

Tim finished second in the competition, behind a competitor from the Basque Culinary Center itself.