This article was written by Mike Breen for City Beat Magazine. Click here to read the original version online.

Several years ago, Cincinnati multimedia artist Vernard Fields asked his friend and fellow rapper Adam Hayden (better known in Cincy Hip Hop circles as MC Till) if he’d like to make a children’s album with him. Hayden was interested, but the project was forgotten until 2012, when he was working with first graders as a teacher with Cincinnati Public Schools. 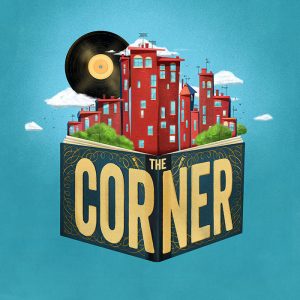 Getting frustrated with the boisterous tykes, Hayden grabbed a book of children’s poetry and began reading. It was when he switched to rapping the poems that he discovered he had the kids’ rapt attention. Hayden subsequently reconnected with Fields about the children’s project, and eventually the process behind The Corner, an album and book using storytelling, Hip Hop and illustrations, would begin. 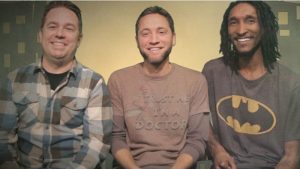 The final key to the project was Charlie Padgett (SHDHS Class of 1985), an award-winning Cincinnati illustrator who now lives in France. Padgett has worked with local establishments like Happen, Inc. and MadTree Brewing, as well as international advertising companies and publications. His breathtaking illustrations have a childlike wonder to them and he had worked on children’s projects previously, making him a perfect fit for The Corner. Padgett’s artwork is also strikingly original and helped shape the tone of The Corner.

“We wanted to create children’s content in the irreverent tradition of our heroes like Shel Silverstein, Roald Dahl and Maurice Sendak,” Hayden wrote on the project’s crowdfunding page. “Stories that we would enjoy. Illustrations that intrigue us as parents and at the same time are engaging for very young people. Art that does not shy away from the conflicting humanity within us all, but embraces it, celebrates it, and wrestles with it. That is the essence of The Corner.” 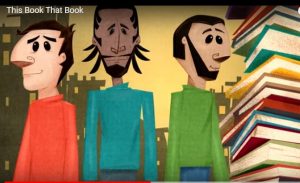 To underwrite the project, the trio started a GoFundMe campaign. Besides parents, the creators also targeted educators with hopes that The Corner would be used in classrooms as an educational vehicle, an aspect baked into the concept from the start. They made a Corner study guide for teachers and offered those donating the opportunity to receive or gift the project to teachers or entire schools across the country. Fields and Hayden have also been sharing The Corner through appearances at schools, as well as area libraries.

Earlier this summer, The Corner became available for the first time, as a book — featuring Padgett’s illustrations coupled with the song lyrics — and a CD or download with the music. There is also a gorgeous package with the music on a vinyl album and the book in the gatefold sleeve.

Aimed at children ages 3-7, each of the seven silly tracks on The Corner is a different vignette, often dealing with fundamental early life lessons, such as on “Pick Up Your Towel” and “We Like to Share.” They are strung together by upbeat conversation between Hayden and Fields that gives the album a sense of cohesion.

One of the great struggles for parents of young kids is finding music the child enjoys that isn’t painful for grown-ups to hear (and, if it sticks, hear a lot). The ideal music isn’t just tolerable, but enjoyable for the adults. The Corner definitely fits that bill, falling somewhere between the quirky Pop of the children’s albums by AltRock duo They Might Be Giants and the colorful, oddball playfulness of the music-filled TV show Yo Gabba Gabba!

Along with solid, catchy songs and an almost surrealistic sense of silliness, those projects also possessed enough cross-generational callbacks to make parents go, “Oh, I see what you’re doing.” For The Corner, a big part of that is the vibe of the beats, which have the feel of J Dilla or A Tribe Called Quest. Likewise, Hayden and Fields are very good MCs — even though they (necessarily) keep their performances wide-eye bright and hyper-enunciated, you can hear in the movement of their voices the experience and talent.

There is “grown” Hip Hop that has kid-appeal, but for Hip Hop designed for children, The Corner should be your first choice. For educators, it can help connect kids to things like storytelling, poetry and rhythm. For parents, it’s all of that and an opportunity to knock The Wiggles and Barney out of the playtime playlist.

The different formats of The Corner can be purchased at thecorner.us; you can also stream/download the music at thecornerus.bandcamp.com.