A former Crusader basketball standout will take his talent to a new court next school year.

Adam Goetz ‘16 transferred to Kentucky Wesleyan from Mount St. Joseph University.  As a sophomore at MSJU, he was one of the most efficient three-point shooters in all of NCAA Division III last season, leading the Heartland Collegiate Athletic Conference in three-point shooting percentage at 50% and averaged 12.5 points per game. He was the 2016-17 HCAC Freshman of the Year and a Second-Team Selection his sophomore season. 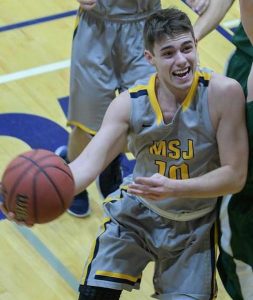 Last season he amassed 29 steals, made 85 percent of his free throws, and scored a career-high 27 points during a big win in February by knocking down six 3-pointers. Goetz scored in double figures 15 times and netted a total of 602 career points in two years.

“I am looking forward to joining the Panther family and making an impact in a new era of basketball in Owensboro,” said Goetz.  “Having the opportunity to play in the Sportscenter is something special and I can’t wait to get started.”