This article appeared in the Cincinnati Enquirer on Friday, July 13. You can read the original article online by clicking here. 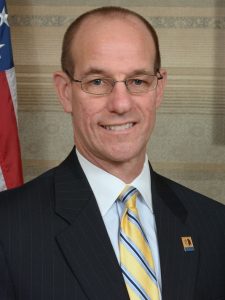 “Tri-ED has led the way in economic development in the commonwealth of Kentucky since its founding 31 years ago, with Northern Kentucky, the region it serves, having outperformed the rest of the state,” said Campbell County Judge-executive Steve Pendery, immediate past chair of Northern Kentucky Tri-ED.

“Dan has been a principal in or the leader of the organization for 28 of those years. It is no wonder his peers think so highly of him,” Pendery said.

“He is family-focused and community-centered in everything he does, and I’m looking forward to seeing his contributions to Northern Kentucky in the years to come,” Knochelmann said.

An interim president/CEO of Northern Kentucky Tri-ED is expected to be announced in late July.

“Dan Tobergte’s faithful and steady service leaves a lasting impact on the Tri-ED organization and the Northern Kentucky region. His character, integrity and professionalism have served our region well, and we will benefit from his efforts for many years to come,” said Boone County Judge-executive Gary Moore, chair-elect of Northern Kentucky Tri-ED.

Tobergte, a native of Independence and a licensed Kentucky attorney, graduated from Chase College of Law at Northern Kentucky University in 1988, preceded by a Master of Public Administration degree and an undergraduate degree, both from Eastern Kentucky University. Tobergte volunteers time and effort to St. Henry District High School, Redwood and Immaculate Heart of Mary Church/School, plus coaches youth baseball and basketball.

Since its founding in 1987, more than 670 primary industry projects have located to or expanded within Northern Kentucky, creating more than 67,000 new jobs and investing more than $8.4 billion.