Below a simple sign depicting a black and white drawing of a hamburger in Covington lies one of Northern Kentucky’s hidden dining gems, bringing patrons from near and far since being named the best burger in the region by NKY Magazine earlier this year. 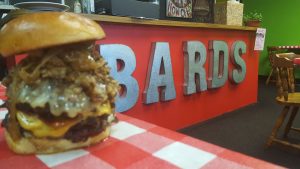 Bard’s Burgers is the passion of chef and owner Jordan Stephenson (SHDHS Class of 2003), who worked 100-hour weeks to establish his restaurant as “the dive that’s worth the drive.”

Featuring 13 burger options, Cincinnati-style chili dishes and unique desserts not for those counting calories, Bard’s has been quietly gaining notoriety since opening in 2015.

“We try to specialize in a classic style burger, really simple, really good,” Stephenson says. “A lot of people say it’s hands down the best burger they’ve ever had and it kind of ruins them for other burger places.”

Patrons can go from the simple “Purist” burger featuring only a bun and patty to the Mic’s Pub Burger which includes a double patty, bacon, fried egg, American cheese, lettuce, onion, pickle and mayonnaise to the more obscure doughnut burger, which features, yes, a doughnut bun.

Stephenson added regional favorite chili dishes like the 3-way and cheese coney to the menu to compliment the burgers and also recommends the cheese curds and inside-out donut S’mores.

This is the second go-round in the restaurant business for Stephenson, who says he had bad luck with his first venture and committed himself to making Bard’s a successful operation.

“I didn’t want to be afraid to fail again,” he says. “Opportunity came up and we just kind of hit the ground running.”

He’s been able to cut his time at the restaurant to a reasonable 60 hours a week thanks to his staff, which Stephenson describes as a familial type atmosphere, which is important when working in the fast-paced restaurant industry.

“It’s like a big family, when you’re working with people all day you want to get along.”

The atmosphere at Bard’s stretches from blue-collar neighborhood regulars to upscale diners driving miles to try the newest culinary hot spot. And Stephenson has no problem catering to a wide range of clientele.

“I attract every walk of life to here,” he says. “I treat them all, it doesn’t matter who they are.”

The restaurant’s bar reflects the difference in personalities. The draft selections are comprised of craft beers from mostly local breweries, but there are still plenty of domestic bottles for the light beer drinkers.

Whether it’s a burger and a Bud after work or a special excursion to try the newest hot spot, Stephenson encourages everyone to come down to the dive that’s worth the drive.